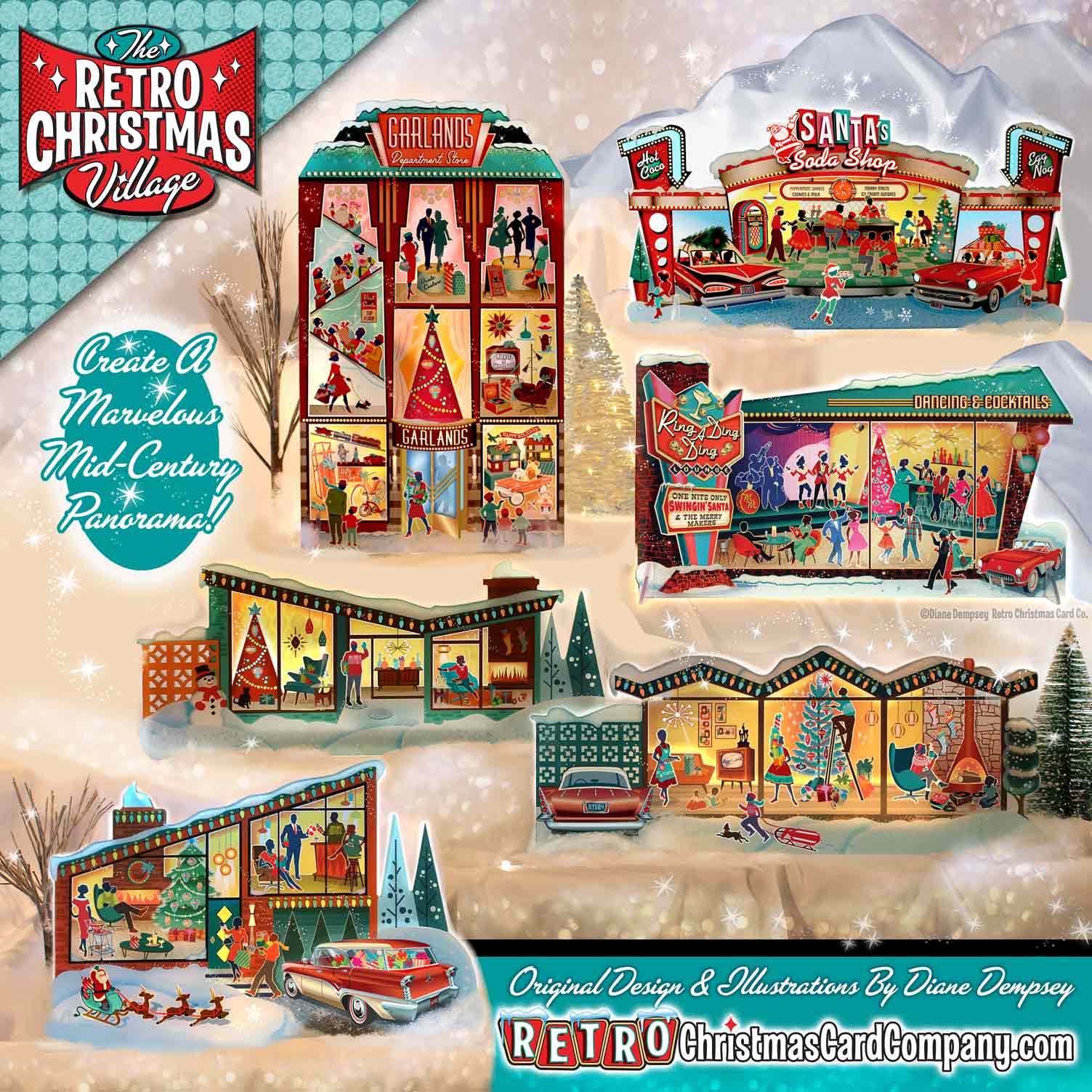 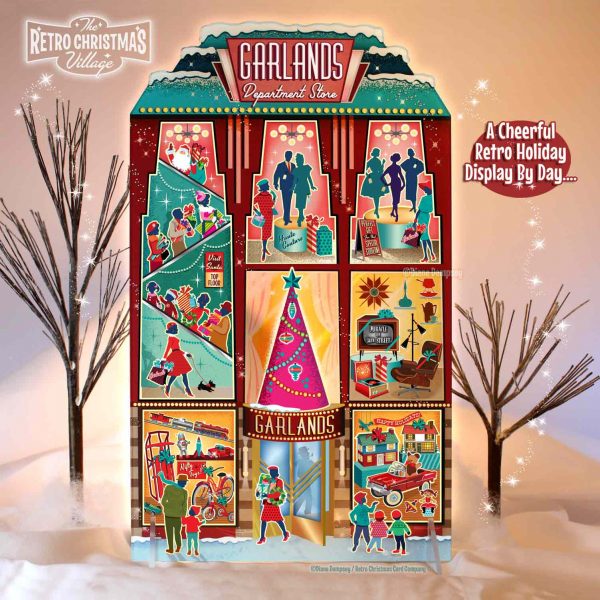 Garland’s Department Store – My memories of shopping downtown with my Mother in the 1960s and also working in a big department store as a teen inspired this exciting display. I invented Garland’s from my imagination (it never actually existed). This glamorous mid-century scene plays out with festive shoppers visiting the three stories of this grand store front from the 1950s. It’s a peek into the past, toy trains, pedal cars, record players and the latest in couture fashion of the era. Light up the display and reveal the escalator carrying all the patrons up, even Santa is on his way to the “North Pole” of Garland’s Department store. Add some miniature trees, a bit of fluffy snow and a light behind it to recreate Christmastime downtown from yesterday.  The Garland’s Department Store Christmas display was also inspired by the  song “Silver Bells”.

Ring-a-ling, hear them ring, Soon it will be Christmas day

In the air there’s a feeling of Christmas…. 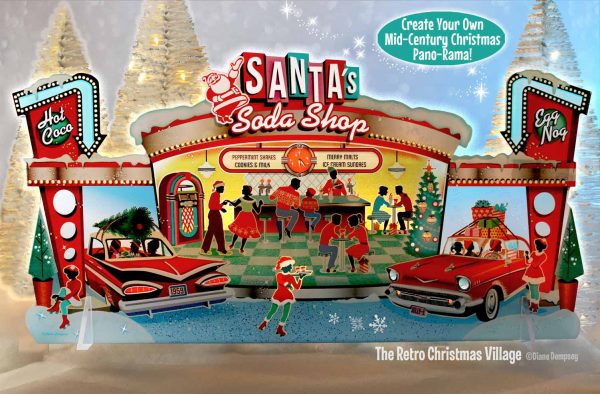 Santa’s Soda Shop is a Christmas display with a fun ’50’s theme. You may remember one of my illustrated Retro Christmas Cards with a similar theme, 1950s Drive-in Diner it has been updated and is still available. The Santa’s Soda Shop “neon” sign and marquee lights glow when lit from behind. It features classic cars with headlights on, roller skating car hops, and a cheerful jukebox with swing dancing kids “Rockin’ Around The Christmas Tree”. It’s the festive place to be as customers of all ages enjoy their holiday sweet treats. Santa’s Soda Shop is a Christmastime slice of Americana, and a classic addition to your Retro Christmas Village. Your Holidays are sure to be happy days with this nostalgic scene set up and glowing with Christmas spirit in your place. 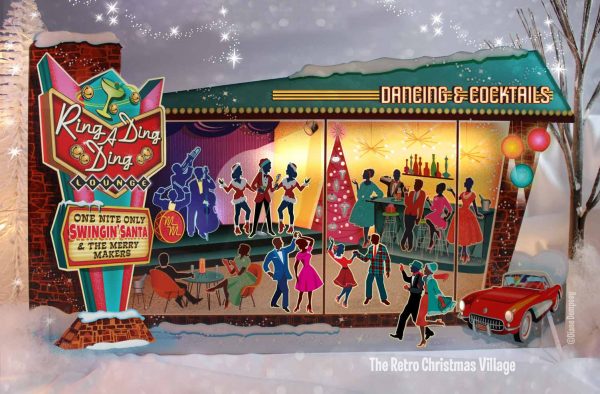 At The Ring A Ding Cocktail Lounge, the joint is jumping! The imaginary band, “Swingin’ Santa and the Merry Makers” take the stage and the dancers hit the floor. Patrons enjoy a little Christmas cheer and are dressed to impress in their vintage holiday attire. A late arriving couple dashes in from their brand new Corvette (they left the headlights on). It’s a fun addition to The Retro Christmas Village and a must have for your holiday display! I can just hear that cheerful holiday tune “Boogie Woogie Santa Claus” right now. This scene was partially inspired by the Holiday TV Specials that entertainers like Dean Martin and the Gold-diggers would broadcast in the 1960s. I also was informed by 1950’s “Googie” diner architecture. It was also a “gotta do” on my wish list because of our love of vintage Christmas music and swing dance. It’s the Dance Hall of my dreams! You may remember the Ring-A Ding lounge from our Retro Christmas Ornaments collection too. 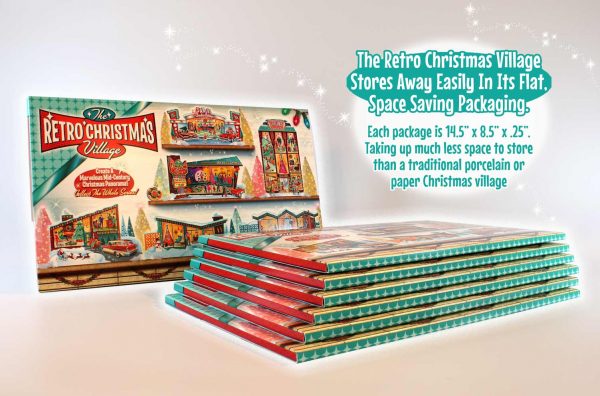 What else is new? This year I designed a snazzy new full color package that will protect your Retro Christmas Village display on the way to you and also when you put it away for the season. Each display will tuck snugly into the box, store flat and take minimal space in your Christmas decor closet. A real difference from those ceramic Christmas Villages that fill your garage. One of my main concepts when developing The Retro Christmas Village was to make it easy to store and quick to set up.

~~~~~~~~
We are so thrilled that folks have collected the first edition of the Retro Christmas Village and have even begun to send rave reviews for the newest in the series. We’re flattered by the wonderful reviews that were posted and want to share them with you. Here are a few of the Kudos that we received:

I ordered all 3 of the Mid-Century Modern Christmas home decorations - they are AMAZING! Just as with the ornaments, they are so detailed and so colorful. They really are amazing and if you have not ordered them, you should! I am so pleased. I cannot wait until next year to set up a display and show them off! They arrived safe and secure and neatly packaged. I am very happy with the whole experience with this shop!! 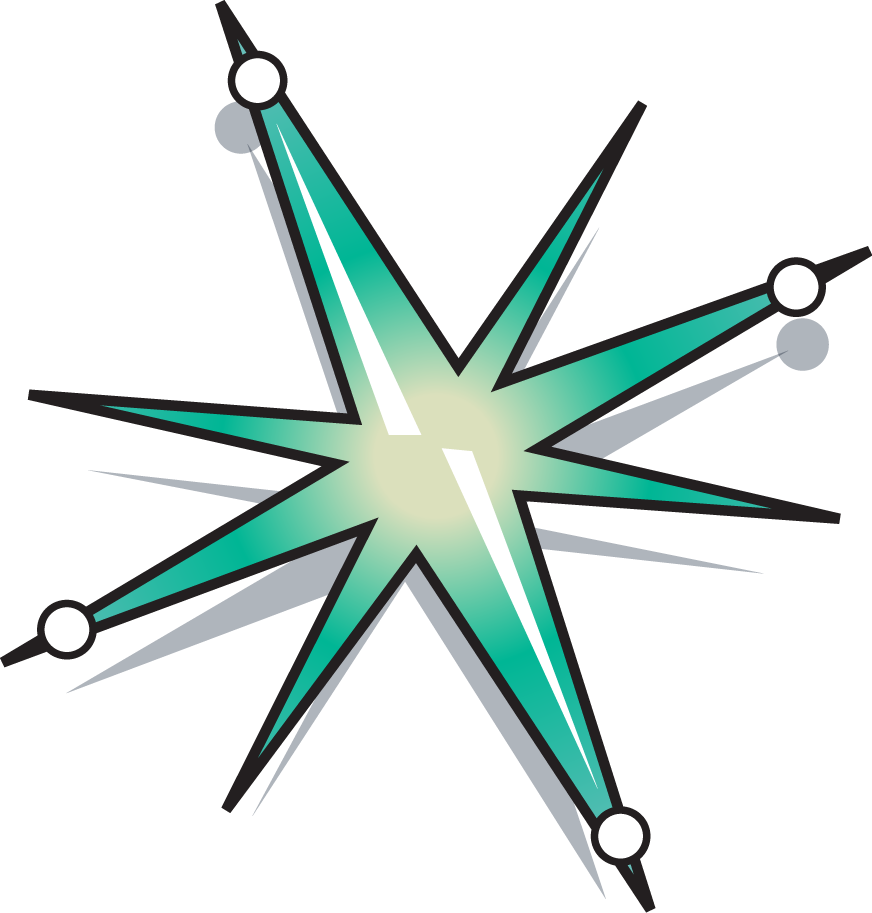 Jennifer
Happy Customer
Just the best. Everyone loved them. We got all three! Added some LED "fairy lights" and wowsers. Thanks! 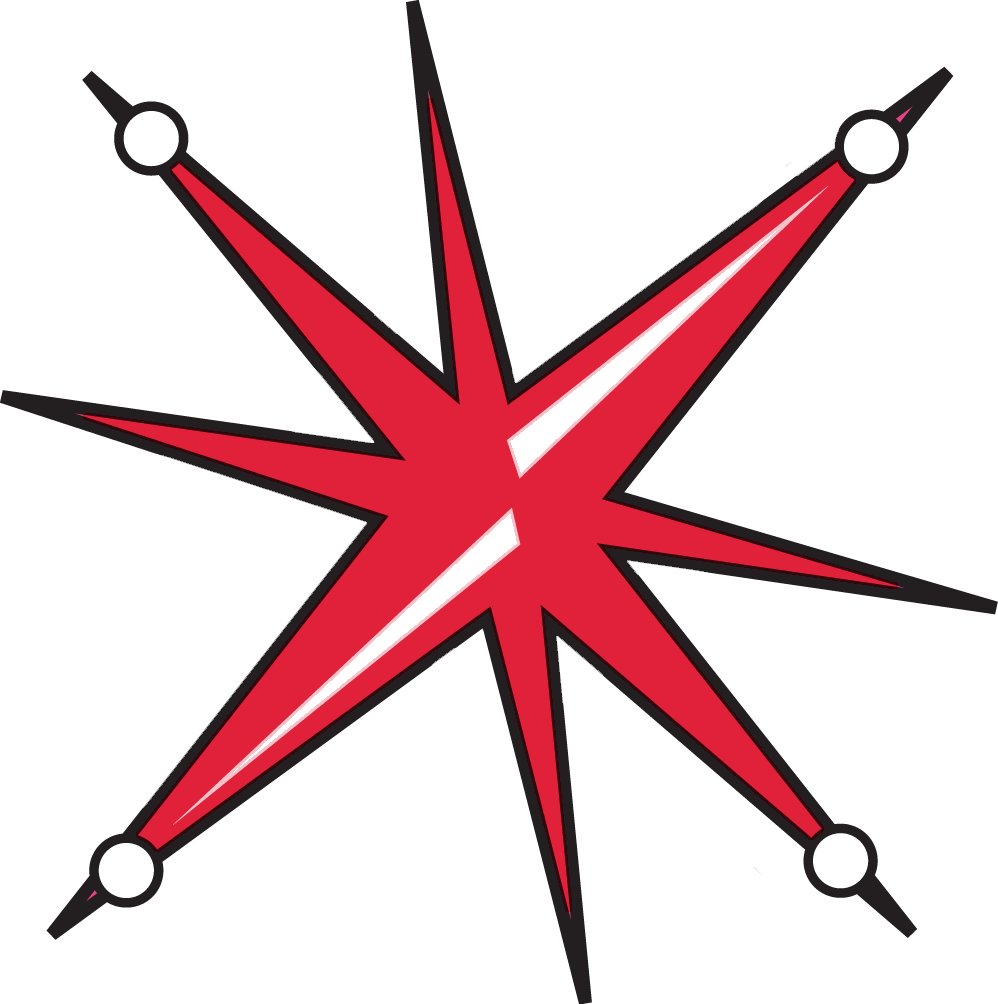 Mitch
Happy Customer
Absolutely loved this item. Arrived quickly and in perfect condition. This display will become part of my annual decorations. I have purchased from this seller before. Her retro Christmas cards are fabulous. This display in reality is my dream home. Who wouldn't want to live in this butterfly style mid-century home!