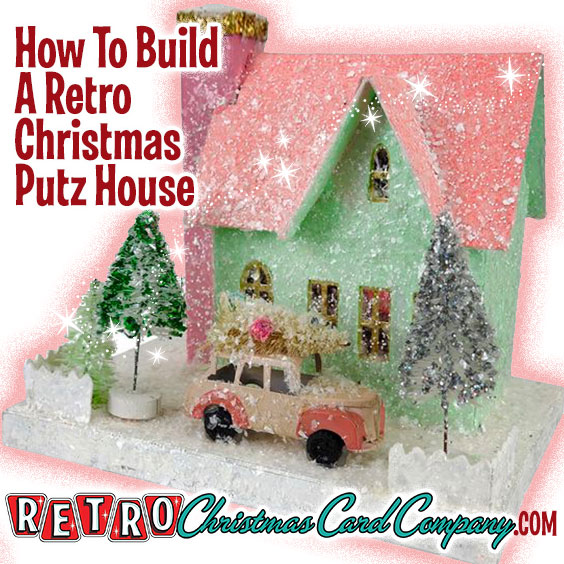 How To Build A Retro Christmas Putz House

This week on Mid-Century Merry Makers we will build a vintage Putz house out of paper, glitter and all sorts of magic. I have collected a series of resources for you to get started with plenty of  inspiration and direction.  Special Thanks to the Pink Tree Youtube Channel + the Facebook group: Nutz For Putz – as well as Lucy Foxworth of  PaperGlitterGlue.com

What is a Putz House you might ask?
Well, from days long past, there was an infatuation with little cardboard Christmas Village houses that were imported from the countries of Germany, Japan, and Czechoslovakia. The collection and display craze of these little villages depicting “sleepy Winter scenes” from hamlets and quaint towns throughout Europe and the United States, were popular as far back as the late 1800’s and all the way up to the late 1960’s respectively. The greatest village houses that were ever built, were made by the humble Japanese back the 1930’s. These were BIG, BOLD, and graced an elaborate amount of embellishments to give them an almost fantasy-like look to them. Today, we call these sweet little gems “Putz Houses”. (Putz def: {German} “To decorate, put in order, ornament”). They have also been called “glitter”, or “sugar sand” houses as well…

What You Will Need
To get started  building vintage-style cardboard houses you will need clean cardboard or card stock. You can save cereal boxes, the backs of writing pads – flat, firm and thick enough to be sturdy but not so thick that you cannot cut it easily with an exacto knife. In addition foam core or  corrugated cardboard for the house bases. In addition, for this project you’ll need:

The Mid-Century Modern Christmas Village! Collect them all and create your own Retro Christmas PANORAMA! Click the images to learn more! 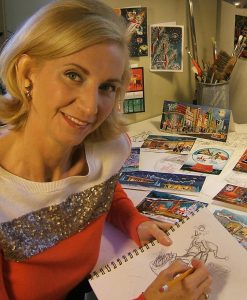